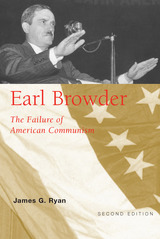 Earl Browder: The Failure of American Communism
by James G. Ryan
University of Alabama Press, 2005
Paper: 978-0-8173-5199-1
Examines the political history of a 20th-century Communist part leader in the US

Earl Browder, the preeminent 20th-century Communist party leader in the United States, steered the CPUSA through the critical years of the Great Depression and World War II. A Kansas native and veteran of numerous radical movements, he was peculiarly fitted by circumstance and temperament to head the cause during its heyday.

Serving as a bridge between American Communism’s secret and public worlds, Browder did more than anyone to attempt to explain the Soviet Union’s shifting policies to the American people in a way that would serve the interests of the CPUSA. A proud and loyal follower of Joseph Stalin, Browder nevertheless sought to move the party into the U.S. political mainstream. He used his knowledge of domestic politics to persuade the Communist International to modify Popular Front (1935-1939) tactics for the United States.

Despite his rise in the hierarchy, he possessed an independent streak that ultimately proved his undoing. Imprisonment as he neared age 50 left permanent psychological damage. After being released with the approval of President Franklin D. Roosevelt, Browder lost his perspective and began entertaining delusions of grandeur about his status in American politics and in the world Communist movement. Still, he could never quite bring legitimacy to the CPUSA because he lacked the vision and moral courage to separate himself totally from the Soviet Union. Ryan concludes that Browder was not so much insincere as deluded. His failure contributed to the demise of the popularity of the Communist party in the United States.

In preparation for this book, the author consulted the Browder Papers at Syracuse University and U.S. Government documents, particularly the F.B.I. files. In addition, he traveled to Russia for research in the Soviet Archives when recently opened to Western scholars, including the records of the former Communist International and a collection of American Communist party files, 1919-1944, shipped secretly to Moscow long ago. Indeed, until 1992, the existence of the CPUSA collection was only rumored.
AUTHOR BIOGRAPHY
James G. Ryan is Assistant Professor of History at Texas A&M University at Galveston.
REVIEWS
“An extremely valuable and insightful work of scholarship on the CPUSA’s most significant—and most tragic—figure.”
—David J. Garrow, The College of William and Mary
— -