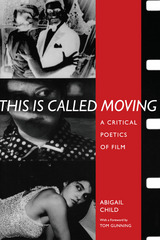 As the writer, director, producer, and cinematographer of almost all her 30 films, videos, and shorts, Abigail Child has been recognized as a major and influential practitioner of experimental cinema since the early 1970s. Hallmarks of her style are the appropriation and reassembly of found footage and fragments from disparate visual sources, ranging from industrial films and documentaries to home movies, vacation photography, and snippets of old B movies.

The resulting collages and montages are cinematic narratives that have been consistently praised for their beauty and sense of wonder and delight in the purely visual. At the same time, Child's films are noted for their incisive political commentary on issues such as gender and sexuality, class, voyeurism, poverty, and the subversive nature of propaganda.

In the essays of This Is Called Moving, Child draws on her long career as a practicing poet as well as a filmmaker to explore how these two language systems inform and cross-fertilize her work. For Child, poetry and film are both potent means of representation, and by examining the parallels between them—words and frames, lines and shots, stanzas and scenes—she discovers how the two art forms re-construct and re-present social meaning, both private and collective.

Abigail Child is Professor of Film and Animation at the School of the Museum of Fine Arts in Boston and author of A Motive for Mayhem and Artificial Memory.Tom Gunning is Professor of Art History at the University of Chicago and author of D. W. Griffith and the Origins of American Narrative Film: The Early Years at Biograph.

REVIEWS
“An excellent and distinctive addition to the MCP series. . . . This book focuses a highly articulate poetic intelligence on a range of topics relevant to film studies and literary writing, and at the same time presents a portfolio of interviews and discussion and script material that charts the trajectory of a significant contemporary experimental filmmaker.”
—Bruce Andrews, author of Paradise and Method: Poetry and Praxis