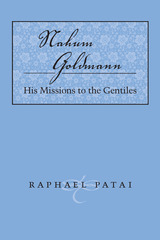 The first exploration of Nahum Goldmann and his extraordinary life

Nahum Goldmann (1895-1982) was a major Zionist figure for the last half-century and the chief architect of the pact pledging West Germany to pay reparations to Israel and to individual Jews for acts committed during the Nazi regime. He was co-founder of the Eschkol Publishing House in Berlin and was co-publisher of the Encyclopedia Judaica, the only major Jewish encyclopedia published in Germany.

Patai’s study is the first to explore this brilliant, often irritating, and enormously successful Jewish politician and diplomat. Goldmann represented no government, yet he effected important international change. The book discusses Goldmann’s involvement with the partition controversy which led to the establishment of Israel, West German reparation payments amounting to over $36 billion, and a series of attempts to meet with Egyptian President Nasser in hopes of bringing peace to the Middle East.
AUTHOR BIOGRAPHY
Raphael Patai is an author and anthropologist specializing in the Middle East.
REVIEWS
“Nahum Goldmann, Zionist leader, diplomat, the founder of the World Jewish Congress and its president for many years, enjoyed one of the most disputed reputations in Zionist circles. . . . [In this book], Goldmann emerges as an interesting personality, a bon-vivant, a brilliant conversationalist, and a most gifted diplomat.”
—Jewish Quarterly Review


Recommended to all who are interested in exploring the life of one of the most interesting Jews of the century.”
—CHOICE