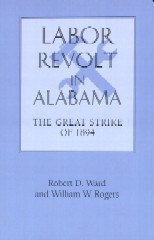 The gripping story of the 1894 Alabama coal miners strike

The Alabama coal miners’ strike of 1894 to gain improved working conditions and to protect themselves from wage reductions. The authors recount the depression of the early 1890s, which set the stage for the strike, and the subsequent use of convict labor, which became a catalyst. The gripping story of the strike includes the dramatic decision to strike and corporate attempts to break the strike by the use of company guards and “scab” labor. In Alabama corporate bosses inflamed passions further by deploying African American “black leg” workers, ultimately requiring the deployment of the state militia to restore peace.
REVIEWS
“During an economic depression period the strong trade union of the United Mineworkers of Alabama was founded [and] became instrumental in the 1894 coal miners’ (and railway workers’) strike. The particular conditions under which the strike was started and carried on are vividly recalled in this book. . . . Connected issues are the racial problem (Negroes were employed as strike-breakers) and the struggle between the Bourbon Democrats and the Populists. . . . Most valuable.”
—International Review of Social History
— -


“Written with economy, clarity, and even a certain amount of grace. . . . Ward and Rogers have handled a difficult research problem successfully. [Their book] will stand as the final word on the Alabama miners’ strike of 1894.”
—American Historical Review
— -


“Certain elements of the Alabama labor dispute make it unique. The major factor that entered the picture was an alliance between the union leaders and the agrarian Populists in an attempt to unseat the Bourbon Democrats. The fact that the political farmer-labor alliance was unsuccessful is not important. It is significant, however, that an alliance was formed in Alabama when, as the authors point out, elsewhere in the nation such cooperation was at a minimum or did not exist at all.”
—Tennessee Historical Quarterly
— -

TABLE OF CONTENTS
Contents
Preface
1. Early Efforts at Organization
2. Unionization, Political Revolt, and Panic
3. The Strike Begins
4. Violence and State Troops
5. More Violence and a Quieter Note
6. Trouble at the Tracks
7. The Miners and Political Protest
8. "The Agony Is Over"
Notes
Bibliography
Index