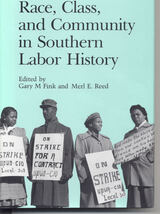 Under the leadership of Gary M. Fink and Merl E. Reed, Georgia State University hosts the Southern Labor Studies Conferences approximately every two years. The conferences have yielded two previous volumes, published in 1977 and 1981, and this volume, which contains selected papers from the seventh conference held in 1991.

As evidence by the quality of these essays, the field of southern labor history has come into its own. Research interest is peaking: the practitioners are younger scholars, and much of their work emphasizes the new social and political history. While the topics covered in this volume usually reflect that methodology, their chronology ranges from the antebellum period to the 1970s, suggesting the variety of sources and changing research approaches that can be used in rendering new meaning to the past. Although the subject of gender was generally a minor theme in these sessions, work now being done leaves no doubt that at some future conference gender will attract a commanding amount of attention.
In introducing and describing their respective areas, the associate editors, Robert H. Zieger (textile workers), Joe W. Trotter (African Americans), and Clifford Kuhn (labor politics), have provided a rich historiographical background.
The essays in this volume will enlighten the reader on many important aspects of the history of southern labor, and they will also raise new questions to be explained by other scholars and future conferences.
AUTHOR BIOGRAPHY

REVIEWS
“A strong, impressive book that is well organized, well written, and demonstrates how far the study of Southern labor history has progressed.”
—Thomas E. Terrill
University of South Carolina.
— -