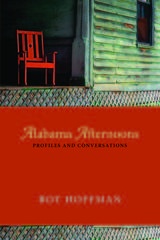 A collection of portraits of many remarkable Alabamians, famous and obscure, profiled by award-winning journalist and novelist Roy Hoffman

Alabama Afternoons is a collection of portraits of many remarkable Alabamians, famous and obscure, profiled by award-winning journalist and novelist Roy Hoffman. Written as Sunday feature stories for the Mobile Press-Register with additional pieces from the New York Times, Preservation, and Garden & Gun, these profiles preserve the individual stories—and the individual voices within the stories—that help to define one of the most distinctive states in the union.

Hoffman recounts his personal visits with writer Mary Ward Brown in her library in Hamburg, with photographer William Christenberry in a field in Newbern, and with storyteller Kathryn Tucker Windham and folk artist Charlie “Tin Man” Lucas at their neighboring houses in Selma. Also highlighted are the lives of numerous alumni of The University of Alabama—among them Mel Allen, the “Voice of the Yankees” from 1939 to 1964; Forrest Gump author Winston Groom; and Vivian Malone and James Hood, the two students who entered the schoolhouse door in 1963. Hoffman profiles distinguished Auburn University alumni as well, including Eugene Sledge, renowned World War II veteran and memoirist, and Neil Davis, the outspoken, nationally visible editor of the Lee County Bulletin.

Hoffman also profiles major and minor players in the civil rights movement, from Johnnie Carr, raised in segregated Montgomery and later president of the Montgomery Improvement Association; and George Wallace Jr., son of the four-time governor; to Theresa Burroughs, a Greensboro beautician trampled in the march over the Edmund Pettus Bridge; and Diane McWhorter, whose award- winning book explores the trouble- filled Birmingham civil rights experience. Juxtaposed with these are accounts of lesser-known individuals, such as Sarah Hamm, who attempts to preserve the fading Jewish culture in Eufaula; Edward Carl, who was butler and chauffeur to Bellingrath Gardens founder Walter Bellingrath in Theodore; and cousins William Bolton and Herbert Henson, caretakers of the coon dog cemetery in Russellville.

Hoffman’s compilation of life stories creates an engaging and compelling look into what it means to be from, and shaped by, Alabama. “Alabama Afternoons,” he writes in the introduction, “is a small part of the even bigger question of what it means to be an American.”
Read an article about domestic lives by Roy Hoffman in the New York Times here: http://www.nytimes.com/2010/11/25/garden/25Domestic.html

AUTHOR BIOGRAPHY
Roy Hoffman is author of the novels Almost Family, winner of the Lillian Smith Award for fiction, and Chicken Dreaming Corn, a BookSense pick endorsed by Harper Lee. He is author of two essay collections, Back Home: Journeys Through Mobile and Alabama Afternoons: Profiles and Conversations, and his articles and reviews have appeared in the New York Times, Fortune, Southern Living, and the Mobile Press-Register, where he was a long-time staff writer.

A graduate of Tulane University who worked as a journalist and speechwriter in New York City before moving back south to Fairhope, AL, he received the Clarence Cason Award in nonfiction from The University of Alabama and is on the faculty of the Spalding Brief Residency MFA in Writing Program. On the web: www.Facebook.com/RoyHoffmanWriter
REVIEWS

“Warren Koon, a former editor and colleague in journalism, once said everybody has a story to tell if you will just take time to listen to it. Indeed, it was something I had already learned, and Roy Hoffman drives the point further home in this wonderful collection of Alabamians and their stories.”
—Alabama Writers’ Forum

“Hoffman’s anecdotal style and eye for interesting and entertaining details and personal histories shines throughout the book.”
—The Anniston Star

“With its colorful, often troubled history, Alabama has made an impression in the national mind. Hoffman hopes to add to it with nuanced portraits shaped by being from the state or living there at a crucial point in their lives.”
—Booklist Online

“Hoffman is a gifted writer. His style is easy to read. Every sentence is clear, strongly constructed, and connected to the overall theme. . . . I’m fortunate to either know or be acquainted with several of his subjects, and he has captured each of them nicely.”
—Curtis Wilkie, author of Dixie: A Personal Odyssey through Events that Shaped the Modern South

Part I: The Makers 5

William Christenberry: Pilgrimage of the Heart 7

A photojournalist’s nation-shaking images of the civil rights movement

A folk artist renders the past, and the passing scene, in rich colors

She tells ghost stories; he makes art from metal; they are neighbors and best friends

A first-time author at age 69, she still hears the muse twenty years later

Sena Jeter Naslund: A Story Deep Inside Her 46

Diane McWhorter: Taking Pictures from the Inside 53

tumultuous history with her own

Leaving behind Mobile in his 20s, a native son returns in his 50s to start anew

Artelia Bendolph: The Girl in the Window 67

Aged and blind, a woman tells of her famous, long-ago photograph in Gee’s Bend

Eugene Sledge: “With the Old Breed” 75

The WWII memoirist speaks of his boyhood, the war, and a book he had to write

Gay Talese: Made in Alabama 91

Meditations on a legendary newspaper career and different paths taken

When Forrest Gump told his story, he transformed the author’s world, too

Tommy Tarrants and Stan Chassin: Deliver Us from Evil 111

A Jew and a Klansman, violence and forgiveness, lives intersecting after over forty years

Part IV: Witnesses to the Movement 123

The Stand in the Schoolhouse Door 133

Loving, defending, and coming to terms with a father controversial to the world

In her 90s, the Montgomery Improvement Association’s leader keeps on

When Dr. King needed safety in Greensboro, her beauty shop was his refuge

In the last Jewish family in Eufaula, a woman strives to keep traditions vibrant

Former students shore up the legacy of Julius Rosenwald and Booker T. Washington

Residing at the Greek Orthodox settlement since 1920, she tells of a vanished world

From behind the wheel of a Packard limousine, an unusual friendship develops

For twenty years the domino game has continued, as has the talk and the laughter

Miss America 1951 looks back on a life of beauty, social conviction, and controversy

Alex Alvarez: Voices from the Past 217

The elusive author of what was, possibly, the first African American cookbook

A sojourn from one Brooklyn to another

A summer job, a Polish immigrant’s tale, and the clanging bells of freedom

The nameplate was still on the door: Charles Hoffman, Lawyer