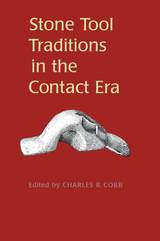 This is the first comprehensive analysis of the partial replacement of flaked stone and ground stone traditions by metal tools in the Americas during the Contact Era. It examines the functional, symbolic, and economic consequences of that replacement on the lifeways of native populations, even as lithic technologies persisted well after the landing of Columbus. Ranging across North America and to Hawai'i, the studies show that, even with wide access to metal objects, Native Americans continued to produce certain stone tool types—perhaps because they were still the best implements for a task or because they represented a deep commitment to a traditional practice.

Chapters are ordered in terms of relative degree of European contact, beginning with groups that experienced brief episodes of interaction, such as the Wichita-French meeting on the Arkansas River, and ending with societies that were heavily influenced by colonization, such as the Potawatomi of Illinois. Because the anthology draws comparisons between the persistence of stone tools and the continuity of other indigenous crafts, it presents holistic models that can be used to explain the larger consequences of the Contact Era.

Marvin T. Smith, of Valdosta State University has stated that, “after reading this volume, no archaeologist will ever see the replacement of lithic technology by metal tools as a simple matter of replacement of technologically inferior stone tools with their superior metal counterparts. This is cutting-edge scholarship in the area of contact period studies.”

Charles R. Cobb is Professor of Anthropology at Binghamton University and author of From Quarry to Cornfield: The Political Economy of Mississippian Hoe Production, also available from The University of Alabama Press.

REVIEWS
“This volume demolishes the traditional view that stone technologies were completely abandoned by Native Americans once European goods were available. . . . [The] case studies lead to new and exciting insights into cultural change and specific transformations that occurred during the Contact Era.”
—Philip Carr, University of South Alabama


“The papers in this volume demonstrate the complexity of cultural contact between Native Americans and Euro-Americans and its effect on stone tool manufacture and use.”
—CHOICE

TABLE OF CONTENTS
Contents
List of Illustrations
List of Tables
1. Introduction: Framing Stone Tool Traditions after Contact
2. Lithic Technology and the Spanish Entrada at the King Site in Northwest Georgia
3. Wichita Tools on First Contact with the French
4. Chickasaw Lithic Technology: A Reassessment
5. Tools of Contact: A Functional Analysis of the Cameron Site Chipped-Stone Assemblage
6. Lithic Artifacts in Seventeenth-Century Native New England
7. Stone Adze Economies in Post-Contact Hawai‘i
8. In All the Solemnity of Profound Smoking: Tobacco Smoking and Pipe Manufacture and Use among the Potawatomi of Illinois
9. Using a Rock in a Hard Place: Native-American Lithic Practices in Colonial California
10. Flint and Foxes: Chert Scrapers and the Fur Industry in Late-Nineteenth- and Early-Twentieth-Century North Alaska
11. Discussion
References Cited
Contributors
Index