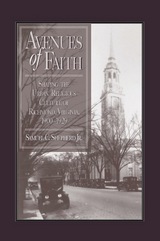 Avenues of Faith documents how religion flourished in southern cities after the turn of the century and how a cadre of clergy and laity created a notably progressive religious culture in Richmond, the bastion of the Old South. Famous as the former capital of the Confederacy, Richmond emerges as a dynamic and growing industrial city invigorated by the social activism of its Protestants.

By examining six mainline white denominations-Episcopalians, Methodists, Presbyterians, Baptists, Disciples of Christ, and Lutherans-Samuel C. Shepherd Jr. emphasizes the extent to which the city fostered religious diversity, even as "blind spots" remained in regard to Catholics, African Americans, Mormons, and Jews. Shepherd explores such topics as evangelism, interdenominational cooperation, the temperance campaign, the Sunday school movement, the international peace initiatives, and the expanding role of lay people of both sexes. He also notes the community's widespread rejection of fundamentalism, a religious phenomenon almost automatically associated with the South, and shows how it nurtured social reform to combat a host of urban problems associated with public health, education, housing, women's suffrage, prohibition, children, and prisons.

In lucid prose and with excellent use of primary sources, Shepherd delivers a fresh portrait of Richmond Protestants who embraced change and transformed their community, making it an active, progressive religious center of the New South.

REVIEWS
“A first-rate book…thoughtfully conceptualized and rationally organized…offering rich insight into the religious culture of the South.”
—Willard B. Gatewood, author of Aristocrats of Color: The Black Elite, 1880–1920
— -


“An altogether new perspective on religion in the American South. No other scholarly work uses an urban community context to explore in depth the parameters of religious life in the South.”
—Charles Reagan Wilson, coauthor of Judgement and Grace in Dixie: Southern Faiths from Faulkner to Elvis
— -