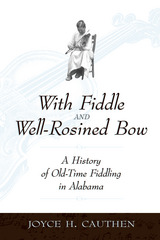 Relying on extensive archival research and on sixty interviews with
fiddlers and their families and friends, Cauthen tells the rich, full story
of old-time fiddling in Alabama.

Writing of life in the Alabama Territory in the late 1700s,
A. J. Pickett, the state's first historian, noted that the country abounded
in fiddlers, of high and low degree. After the defeat of the Creek Indians
at the Battle of Horseshoe Bend in 1813, the number of fiddlers swelled
as settlers from the southern states surrounding Alabama claimed the land.
The music they played was based on tunes brought from Ireland, Scotland,
and England, but in Alabama they developed their own southern accent as
their songs became the music of celebration and relaxation for the state's
pioneers. Early in the 20th century such music began to be called "old-time
fiddling," to distinguish it from the popular music of the day, and the
term is still used to distinguish that style from more modern bluegrass
and country fiddle styles.

In With Fiddle and Well-Rosined Bow, Cauthen focuses
on old-time fiddling in Alabama from the settlement of the state through
World War II. Cauthen shows the effects of events, inventions, ethnic groups,
and individuals upon fiddlers' styles and what they played. Cauthen gives
due weight to the "modest masters of fiddle and bow" who were stars only
to their families and communities. The fiddlers themselves tell why they
play, how they learned without formal instruction and written music, and
how they acquired their instruments and repertoires. Cauthen also tells
the stories of "brag" fiddlers such as D.Dix Hollis, Y. Z. Hamilton, Charlie
Stripling, "Fiddling" Tom Freeman,"Monkey" Brown, and the Johnson Brothers
whose reputations spread beyond their communities through commercial recordings
and fiddling contests. Described in vivid detail are the old-style square
dances, Fourth of July barbeques and other celebrations, and fiddlers'
conventions that fiddler shave reigned over throughout the state's history.

Joyce Cauthen has worked with the Alabama Folklife Association,
the Alabama State Council on the Arts, the Birmingham Cultural and Heritage
Foundation, and other organizations to celebrate and preserve the old-time
musical tradition of the state.

REVIEWS
"This is a major piece of American music scholarship, and a model for what could be done in other areas. It belongs on the bookshelf of every old-time music fan."
—Charles K. Wolfe, author of The Devil's Box: Masters of Southern Fiddling

"Nowhere else have I seen the attention to communities and venues--so much is biographical, and skewed for that orientation. Cauthen's section on Joe Lee is priceless, simply indispensable for anyone who wants to know why fiddling turned out the way it did."
—John Bealle, author of Public Worship, Private Faith: Sacred Harp and American Folksong