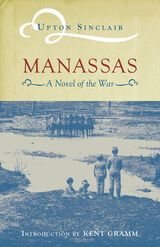 Allan Montague, born on a Mississippi plantation about twenty years before the Civil War, has grown up with slavery and considers it natural. When his father moves to Boston for business and takes the boy with him, young Allan carries a knife given to him by his cousin to use in killing abolitionists.

The first abolitionist young Allan meets in Boston is Levi Coffin, the reputed founder of the Underground Railroad. In this first of many meetings with historical figures, Allan forms a friendship with Coffin, who eventually takes him to hear a speech by former slave Frederick Douglass. Douglass's powerful words cement Allan's transformation into an abolitionist—a transformation that will lead him back to his Deep South home with the hope of freeing slaves and eventually back to the North and the fateful Battle of Manassas.

Kent Gramm, author of the introduction for this new edition of Manassas, calls the novel “a modern version of the morality play,” with the United States as the central character. “The real story, he writes, is the moral phenomenon of the Civil War.” It is a powerful book that deserves to be revived, read, and studied.
AUTHOR BIOGRAPHY

Kent Gramm is professor of English at Wheaton College in Illinois