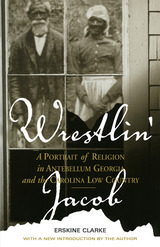 First published in 1979, Wrestlin’ Jacob offers important insights into the intersection of black and white religious history in the South. Erskine Clarke provides two arenas—one urban and one rural—that show what happened when white ministers tried to bring black slaves into the fold of Christianity. Clarke illustrates how the good intentions—and vain illusions—of the white preachers, coupled with the degradation and cultural strength of the slaves, played a significant role in the development of black churches in the South.

From 1833 to 1847, Reverend Charles Colcock Jones served as an itinerant minister to slaves on the rice and cotton plantations in Liberty County, Georgia. The aim of Jones, and of the largely Puritan-descended slave owners, was to harvest not only good Christians but also obedient and hard-working slaves. At the same time, similar efforts were under way in cosmopolitan Charleston, South Carolina. Charleston permitted blacks to worship only under the supervision of whites, and partially as a result, whites and blacks worshiped together in ways that would be unheard of later in the segregated South.

Clarke examines not only the white ministers’ motivation in their missionary work but also the slaves’ reasons for becoming a part of the church. He addresses the important issue of the continuity of African traditions with the religious life of slaves and provides a significant introduction to the larger issues of slavery and religion in the South.
AUTHOR BIOGRAPHY
Erskine Clarke is Professor of U.S. Religious History at Columbia Theological Seminary. His books include Our Southern Zion: The History of Calvinism in the South Carolina Low Country, 1690-1990, also published by The University of Alabama Press.
REVIEWS
“This highly readable and scholarly work adds much to our understanding of the relations between black and white Christians in the antebellum South.”
—Journal of the American Academy of Religion
— -

“Well written and provides excellent insights into relationships of Southern evangelicals to both the slave and institution of slavery.”
—Bill J. Leonard, Review and Expositor
— -

“Informative, enjoyable…Clarke is sensitive not only to the look and feel of life in Liberty County and Charleston but also to the nuances of black and white relationships under slavery.”
—Church History
— -