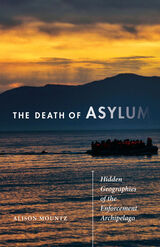 Remote detention centers confine tens of thousands of refugees, asylum seekers, and undocumented immigrants around the world, operating in a legal gray area that hides terrible human rights abuses from the international community. Built to temporarily house eight hundred migrants in transit, the immigrant “reception center” on the Italian island of Lampedusa has held thousands of North African refugees under inhumane conditions for weeks on end. Australia’s use of Christmas Island as a detention center for asylum seekers has enabled successive governments to imprison migrants from Asia and Africa, including the Sudanese human rights activist Abdul Aziz Muhamat, held there for five years.

In The Death of Asylum, Alison Mountz traces the global chain of remote sites used by states of the Global North to confine migrants fleeing violence and poverty, using cruel measures that, if unchecked, will lead to the death of asylum as an ethical ideal. Through unprecedented access to offshore detention centers and immigrant-processing facilities, Mountz illustrates how authorities in the United States, the European Union, and Australia have created a new and shadowy geopolitical formation allowing them to externalize their borders to distant islands where harsh treatment and deadly force deprive migrants of basic human rights.

Mountz details how states use the geographic inaccessibility of places like Christmas Island, almost a thousand miles off the Australian mainland, to isolate asylum seekers far from the scrutiny of humanitarian NGOs, human rights groups, journalists, and their own citizens. By focusing on borderlands and spaces of transit between regions, The Death of Asylum shows how remote detention centers effectively curtail the basic human right to seek asylum, forcing refugees to take more dangerous risks to escape war, famine, and oppression.

Alison Mountz is professor and Canada Research Chair in Global Migration in the Balsillie School of International Affairs at Laurier University. She is author of Seeking Asylum: Human Smuggling and Bureaucracy at the Border (Minnesota, 2010), winner of the 2011 Meridian Book Award.

"In this clear and compelling account, Alison Mountz draws on a range of conceptual tools and original research in island detention sites around the world to map the death of asylum. While much of the news is bad, the final chapters suggest ways forward, reminding us of the possibility and impact of resistance. This is urgent and necessary reading for everyone concerned with contemporary politics and practices of migration control."—Mary Bosworth, University of Oxford

"A brilliant account of the recent evolution of the asylum system at a global level, The Death of Asylum is informed by a single cohesive current of groundbreaking theoretical analysis. One of the most important and urgent books about forced migration ever written."—Michael Collyer, University of Sussex

"A critical contribution to various debates on how geography can be used by state actors to protect their specific and rivalrous interests."—LSE Review of Books

"In its rich blend of empirical data, historical and contemporary detail, and insightful analysis, this is an essential book which deserves to become a classic of migration studies."—Race Class

2. The Border Becomes the Island

3. The Island within the Archipelago

5. Mobilizing Islands to Restrict Asylum Onshore in Canada (or the Death of Asylum, Even in Canada)

6.The Struggle: Countering Death with the Life of Activism