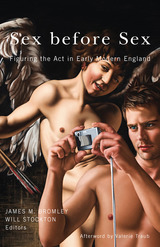 What is sex exactly? Does everyone agree on a definition? And does that definition hold when considering literary production in other times and places? Sex before Sex makes clear that we cannot simply transfer our contemporary notions of what constitutes a sex act into the past and expect them to be true for the people who were then reading literature and watching plays. The contributors confront how our current critical assumptions about definitions of sex restrict our understanding of representations of sexuality in early modern England.


Drawing attention to overlooked forms of sexual activity in early modern culture, from anilingus and interspecies sex to “chin-chucking” and convivial drinking, Sex before Sex offers a multifaceted view of what sex looked like before the term entered history. Through incisive interpretations of a wide range of literary texts, including Romeo and Juliet, The Comedy of Errors, Paradise Lost, the figure of Lucretia, and pornographic poetry, this collection queries what might constitute sex in the absence of a widely accepted definition and how a historicized concept of sex affects the kinds of arguments that can be made about early modern sexualities.

James M. Bromley is assistant professor of English at Miami University. He is the author of Intimacy and Sexuality in the Age of Shakespeare.

Will Stockton and James M. Bromley


1. “Invisible Sex!”: What Looks Like the Act in Early Modern Drama?

2. Death and Theory: Or, the Problem of Counterfactual Sex

3. Spectacular Impotence: Or, Things that Hardly Ever Happen in the Critical History of Pornography

5. The Erotics of Chin-chucking in Seventeenth-Century England

9. The Seduction of Milton’s Lady: Rape, Psychoanalysis, and the Erotics of Consumption in “Comus”