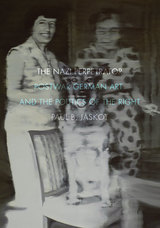 Who was responsible for the crimes of the Nazis? Party leaders and members? Rank-and-file soldiers and bureaucrats? Ordinary Germans? This question looms over German disputes about the past like few others. It also looms over the art and architecture of postwar Germany in ways that have been surprisingly neglected. In The Nazi Perpetrator, Paul B. Jaskot fundamentally reevaluates pivotal developments in postwar German art and architecture against the backdrop of contentious contemporary debates over the Nazi past and the difficulty of determining who was or was not a Nazi perpetrator.

Like their fellow Germans, postwar artists and architects grappled with the Nazi past and the problem of defining the Nazi perpetrator—a problem that was thoroughly entangled with contemporary conservative politics and the explosive issue of former Nazis living in postwar Germany. Beginning with the formative connection between Nazi politics and art during the 1930s, The Nazi Perpetrator traces the dilemma of identifying the perpetrator across the entire postwar period. Jaskot examines key works and episodes from West Germany and, after 1989, reunified Germany, showing how the changing perception of the perpetrator deeply impacted art and architecture, even in cases where artworks and buildings seem to have no obvious relation to the Nazi past. The book also reinterprets important periods in the careers of such major figures as Gerhard Richter, Anselm Kiefer, and Daniel Libeskind.

Combining political history with a close analysis of specific works, The Nazi Perpetrator powerfully demonstrates that the ongoing influence of Nazi Germany after 1945 is much more central to understanding a wide range of modern German art and architecture than cultural historians have previously recognized.

Paul B. Jaskot is professor of art history at DePaul University in Chicago. He is the author of The Architecture of Oppression: The SS, Forced Labor, and the Nazi Monumental Building Economy and the coeditor of Beyond Berlin: Twelve German Cities Confront the Nazi Past.

"Beginning with an analysis of the Nazis’ political uses of art, The Nazi Perpetrator shows how the idea of the Nazi criminal informs the art of successive postwar generations in a variety of different media. Paul B. Jaskot lucidly combines social and political history with close analyses of specific works of art and architecture as well as the history of postwar German art criticism. Meticulously researched, the book explores an important theme that has yet to receive a sustained book-length treatment in English."—Matthew Biro, University of Michigan

"The Nazi Perpetrator is a remarkable study of the way that postwar German art has responded to and helped shape debates about the Nazi dictatorship. Jaskot suggests fundamental changes in the way that scholars should look at postwar German art history, and a reconfiguration of the relationship between art history on the one hand and German Studies on the other. This makes for fascinating, and indeed gripping, reading."—Stephen Brockmann, Carnegie Mellon University


"The virtues of Jaskot’s book are many and various."—German Quarterly

"The novelty of Jaskot’s approach is that he seeks manifestations of grappling with the shifting conception of the “perpetrator” in places one would not normally think to look."—Monatshefte

"His painstaking research intertwines a range of political perspectives with the objects, individuals, and institutions of postwar culture. Jaskot’s book deserves to be counted among the richest recent scholarship on German art, but should also be considered a model for the valuable analysis the most precise histories of art can offer."—German Studies Review

"An important contribution...recommended to anyone who is interested in a more in-depth discussion and artistic interpretation of the 'politics of memory' or 'dealing with the past'."—Sehepunkte

"The Nazi Perpetrator, carefully argued, clearly written, and based on a thorough mastery of both art historical and political material, is an important addition to our understanding of West German art and architecture, as well as the relationship among the arts and politics, trauma and cultural representation."—H-Net Reviews

2. Gerhard Richter and the Advent of the Nazi Past: The Persistence of the Perpetrator

3. Anselm Kiefer and the Ascendance of Helmut Kohl: The Changing Perception of the Perpetrator

4. Daniel Libeskind and the Neo-Nazi Specter: The Resurgence of the Perpetrator


Afterword: The Nazi Past in Postwar Germany’s Cultural History