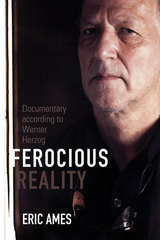 Over the course of his career Werner Herzog, known for such visionary masterpieces as Aguirre: The Wrath of God (1972) and The Enigma of Kaspar Hauser (1974), has directed almost sixty films, roughly half of which are documentaries. And yet, in a statement delivered during a public appearance in 1999, the filmmaker declared: “There are deeper strata of truth in cinema, and there is such a thing as poetic, ecstatic truth. It is mysterious and elusive, and can be reached only through fabrication and imagination and stylization.” Ferocious Reality is the first book to ask how this conviction, so hostile to the traditional tenets of documentary, can inform the work of one of the world’s most provocative documentarians.

Herzog, whose Cave of Forgotten Dreams was perhaps the most celebrated documentary of 2010, may be the most influential filmmaker missing from major studies and histories of documentary. Examining such notable films as Lessons of Darkness (1992) and Grizzly Man (2005), Eric Ames shows how Herzog dismisses documentary as a mode of filmmaking in order to creatively intervene and participate in it. In close, contextualized analysis of more than twenty-five films spanning Herzog’s career, Ames makes a case for exploring documentary films in terms of performance and explains what it means to do so. Thus his book expands the field of cinema studies even as it offers an invaluable new perspective on a little studied but integral part of Werner Herzog’s extraordinary oeuvre.

Eric Ames is associate professor of German and a member of the cinema studies faculty at the University of Washington. He is coeditor of Germany’s Colonial Pasts and author of Carl Hagenbeck’s Empire of Entertainments.

REVIEWS
"Werner Herzog has long avowed that he hates documentaries and does not participate in the tradition. Eric Ames’s wonderful book lets us in on an open secret: ‘Herzog has. . . added to the vitality and visibility of documentary cinema internationally for more than four decades.’ I would go further: the best of the films that Herzog has made over his long career have been those that, if not called documentaries, cannot be labeled fictions. Werner Herzog’s challenges to the documentary tradition have inevitably become part of that tradition. This book shows us how." —Linda Williams, University of California, Berkeley


"Ferocious Reality is excellent. The book centers on how Herzog consistently undertakes an exploration of the limits of documentary cinema and engages with it as performative behavior, challenging its boundaries. Eric Ames analyzes a broad range of Herzog’s films and engages with an array of important theoreticians of documentary cinema. This book is first-rate and innovative." —Brad Prager, author of The Cinema of Werner Herzog: Aesthetic Ecstasy and Truth

Game in the Sand

Land of Silence and Darkness

The Dark Glow of the Mountains

Bells from the Deep

The Great Ecstasy of Woodcarver Steiner

God and the Burdened

Ballad of the Little Soldier

I Am My Films

Encounters at the End of the World

The Cave of Forgotten Dreams