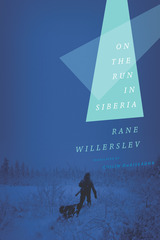 If I had let myself be ruled by reason alone, I would surely be lying dead somewhere or another in the Siberian frost.

The Siberian taiga: a massive forest region of roughly 4.5 million square miles, stretching from the Ural Mountains to the Bering Sea, breathtakingly beautiful and the coldest inhabited region in the world. Winter temperatures plummet to a bitter 97 degrees below zero, and beneath the permafrost lie the fossilized remains of mammoths, woolly rhinoceroses, and other ice age giants. For the Yukaghir, an indigenous people of the taiga, hunting sable is both an economic necessity and a spiritual experience—where trusting dreams and omens is as necessary as following animal tracks. Since the fall of Communism, a corrupt regional corporation has monopolized the fur trade, forcing the Yukaghir hunters into impoverished servitude.

Enter Rane Willerslev, a young Danish anthropologist who ventures into this frozen land on an idealistic mission to organize a fair-trade fur cooperative with the hunters. From the outset, things go terribly wrong. The regional fur company, with ties to corrupt public officials, proves it will stop at nothing to maintain its monopoly: one of Willerslev’s Yukaghir business partners is arrested on spurious charges of poaching and illegal trading; another drowns mysteriously. When police are sent to arrest him, Willerslev fears for his life, and he and a local hunter flee to a remote hunting lodge even deeper in the icy wilderness. Their situation turns even more desperate right away: they manage to kill a moose but lose the meat to predators and begin to starve, frostbitten and isolated in the frozen taiga.

Thus begins Willerslev’s extraordinary, chilling tale of one year living in exile among Yukaghir hunters in the stark Siberian taiga region. At turns shocking and quietly moving, On the Run in Siberia is a pulse-pounding tale of idealism, political corruption, starvation, and survival (with a timely assist from Vladimir Putin) as well as a striking portrait of the Yukaghirs’ shamanistic tradition and their threatened way of life, a drama unfolding daily in one of the world’s coldest, most enthralling landscapes.

Rane Willerslev is professor of anthropology and director of the Museum of Cultural History at the University of Oslo. His primary field of research is hunting and spiritual knowledge among Siberia’s indigenous peoples. He is the author of Soul Hunters: Hunting, Animism, and Personhood among the Siberian Yukaghirs.

Coilín ÓhAiseadha is a freelance translator and professional storyteller with a long-standing interest in wilderness survival skills.

"Driven by a courageous humanitarian vision and a thirst for scientific knowledge, Rane Willerslev endures starvation, bears, arrest warrants, and the curse of an angry lover. This beautifully written account of hardship, determination, and discovery is a testament to the author’s honesty and humanity, and gives a fascinating insight into the work of a leading anthropologist." —Piers Vitebsky, author of The Reindeer People: Living with Animals and Spirits in Siberia

"[Willerslev’s] account is a fascinating study of this remote pocket of ethnic Yakuts, who adhere tenaciously to an ancient language and livelihood despite the existential challenges." —Kirkus Reviews

Preface and Acknowledgments
Glossary of Non-English Words
Gallery of Characters

The Fur Project
1. Shalugin, Leader of the Yukaghirs
2. A Post-Soviet Nightmare
3. Sable Furs for Sale

On the Run in the Wilderness
4. Out of Range
5. Soft Gold
6. Starvation and Desperation
7. In the Yukaghirs’ Camp
8. A Long-Awaited Friend

A Leap in Time

Appendixes: Surviving in Siberia
A. Using the Leghold Trap
B. Yukaghir Idols
C. Netting Fish in Siberia
D. Finding Your Way in the Taiga
E. How to Track and Shoot a Moose