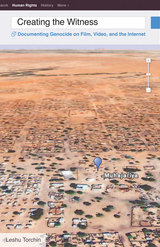 Since the beginning of the conflict in 2003, more than 300,000 lives have been lost in Darfur. Players of the video game Darfur Is Dying learn this sobering fact and more as they work to ensure the survival of a virtual refugee camp. The video game not only puts players in the position of a struggling refugee, it shows them how they can take action in the real world.

Creating the Witness examines the role of film and the Internet in creating virtual witnesses to genocide over the last one hundred years. The book asks, how do visual media work to produce witnesses—audiences who are drawn into action? The argument is a detailed critique of the notion that there is a seamless trajectory from observing an atrocity to acting in order to intervene. According to Leshu Torchin, it is not enough to have a camera; images of genocide require an ideological framework to reinforce the messages the images are meant to convey. Torchin presents wide-ranging examples of witnessing and genocide, including the Armenian genocide, the Holocaust (engaging film as witness in the context of the Nuremburg trials), and the international human rights organization WITNESS and its sustained efforts to use video to publicize human rights advocacy and compel action.

From a historical and comparative approach, Torchin’s broad survey of media and the social practices around it investigates the development of popular understandings of genocide to achieve recognition and response—both political and judicial—ultimately calling on viewers to act on behalf of human rights.

Leshu Torchin is lecturer in film studies at the University of St. Andrews.

1. To Acquaint America with Ravished Armenia

2. Witness for the Prosecution: Films at Nuremberg

3. Reflections on the World Stage: Imagining Fields of Witnessing for Rwanda and the Balkans

4. The Work of WITNESS: Negotiating the Challenges of Video Advocacy

5. iWitnesses and Citizentube: Focus on Darfur