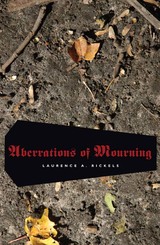 Aberrations of Mourning
by Laurence A. Rickels
University of Minnesota Press, 2011
Paper: 978-0-8166-7595-1
Aberrations of Mourning, originally published in 1988, is the long unavailable first book in Laurence A. Rickels’s “unmourning” trilogy, followed by The Case of California and Nazi Psychoanalysis.
Rickels studies mourning and melancholia within and around psychoanalysis, analyzing the writings of such thinkers as Freud, Nietzsche, Lessing, Heinse, Artaud, Keller, Stifter, Kafka, and Kraus. Rickels maintains that we must shift the way we read literature, philosophy, and psychoanalysis to go beyond traditional Oedipal structures.
Aberrations of Mourning argues that the idea of the crypt has had a surprisingly potent influence on psychoanalysis, and Rickels shows how society’s disturbed relationship with death and dying, our inability to let go of loved ones, has resulted in technology to form more and more crypts for the dead by preserving them—both physically and psychologically—in new ways.
AUTHOR BIOGRAPHY

Laurence A. Rickels moved to the West Coast in 1981 after completing graduate training in German philology at Princeton University. While in California he earned a psychotherapy license. He has published numerous studies of the phenomenon he calls “unmourning,” a term that inspired his trilogy Aberrations of Mourning, The Case of California, and Nazi Psychoanalysis. He has also written the coursebooks The Vampire Lectures and The Devil Notebooks. All of these books have been published by the University of Minnesota Press.

"This book shatters the iron collar of German Studies in America. Brilliant and articulate, Professor Rickels exercises a rigorous erudition over works ranging from Lessing to Artaud. It is as if these works had fallen under a spell, responding willingly to the relentless demands of a master reader. Laurence Rickels’s work marks a moment in what I would call the New Wave sensibility in literary criticism. In the era following Vietnam, schizonomadic thought, and the technological incursions of the media, Aberrations of Mourning offers an urgently timed meditation on our cryptological era." —Avital Ronnell

"Aberrations of Mourning contributes to the vanguards of critical thinking by establishing connections not only between generations and cultures, but between this world and that absolutely other world: it continues the search for and recovery of those missing in history’s natural disaster—the disaster of nature." —Akira Mizuta Lippit

"For Rickels, the link between technology and mourning isn’t merely Freudian and speculative, but also solidly historically grounded…And the literature that emerges in the age of communications technologies—modernist literature—is this cult’s expression, its record, its holy script." —The Guardian