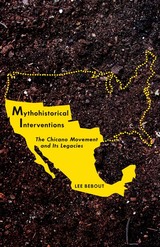 Mythohistorical Interventions explores how myth and history impacted the social struggle of the Chicano movement and the postmovement years. Drawing on archival materials and political speeches as well as music and protest poetry, Lee Bebout scrutinizes the ideas that emerged from the effort to organize and legitimize the Chicano movement’s aims.
Examining the deployment of the Aztec eagle by the United Farm Workers union, the poem Yo Soy Joaquín, the document El Plan de Santa Barbara, and icons like La Malinche and La Virgen de Guadalupe, Bebout reveals the centrality of culture to the Chicano movement. For Bebout, the active implementation of cultural narrative was strategically significant in several ways. First, it allowed disparate movement participants to imagine themselves as part of a national, and nationalist, community of resistance. Second, Chicano use of these narratives contested the images that fostered Anglo-American hegemony.
Bringing his analysis up to the present, Bebout delineates how demographic changes have, on the one hand, encouraged the possibility of a panethnic Latino community, while, on the other hand, anti-Mexican nativists attempt to resurrect Chicano myths as a foil to restrict immigration from Mexico.
AUTHOR BIOGRAPHY
Lee Bebout is assistant professor of English at Arizona State University
TABLE OF CONTENTS


Introduction: Mythohistorical Interventions at the Intersection of American Studies and Chicana/o Studies
1. Locating the Mythohistorical: Three Tales in the Struggle for Hegemony
2. Hero Making in El Movimiento: Reies López Tijerina and the Chicano Nationalist Imaginary
3. Of Mothers and Revolucionarias: Movement Chicanas Fashioning a Feminism of Their Own
4. Queer Genealogies: Chicana Lesbian Feminism & the Post-Movement Era
Conclusion: Echoes of El Movimiento and Other Mythohistorical Interventions
Acknowledgments
Notes
Bibliography
Index