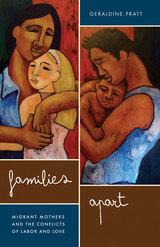 In a developing nation like the Philippines, many mothers provide for their families by traveling to a foreign country to care for someone else’s. Families Apart focuses on Filipino overseas workers in Canada to reveal what such arrangements mean for families on both sides of the global divide.

The outcome of Geraldine Pratt’s collaboration with the Philippine Women Centre of British Columbia, this study documents the difficulties of family separation and the problems that children have when they reunite with their mothers in Vancouver. Aimed at those who have lived this experience, those who directly benefit from it, and those who simply stand by and watch, Families Apart shows how Filipino migrant domestic workers—often mothers themselves—are caught between competing neoliberal policies of sending and receiving countries and how, rather than paying rich returns, their ambitions as migrants often result in social and economic exclusion for themselves and for their children. This argument takes shape as an open-ended series of encounters, moving between a singular academic voice and the “we” of various research collaborations, between Vancouver and the Philippines, and between genres of “evidence-based” social scientific research, personal testimony, theatrical performance, and nonfictional narrative writing.

Through these experiments with different modes of storytelling, Pratt seeks to transform frameworks of perception, to create and collect sympathetic witnesses—in short, to promote a wide-ranging public discussion and debate about a massive worldwide shift in family (and nonfamily) relations of intimacy and care.

Geraldine Pratt is professor of geography at the University of British Columbia.

"In this moving and insightful analysis of Filipino domestic labor in Canada, Geraldine Pratt opens up the intricate webs binding transnational migration and family life within the worldwide expansion of temporary migrant care workers. Pratt moves seamlessly between theory and everyday life as she tells stories that are at once intimate and global, emotional and analytical, mundane and politically significant. I couldn’t put it down." —Melissa W. Wright, Penn State University


"Families Apart is a remarkable and elegant achievement demonstrating beautifully the power of theorizing ‘the concrete,’ the inseparability of ‘the global and the intimate,’ and the all too rarely achieved potential of activist-scholarship to reach further and more deeply than either practice alone. It is compelling in every regard." —Cindi Katz, City University of New York

1. Enterprising Women, Failing Children: Living within the Contradictions of Neo(Liberalism)
2. Waiting and the Trauma of Separation
3. Listening to Mothers’ Stories
4. Creating New Spaces of Politics: Nanay: A Testimonial Play
5. Acting on Attachments: Intimate Witness to State Violence in the Philippines
Conclusion: Research into Action