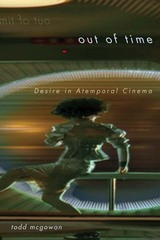 In Out of Time, Todd McGowan takes as his starting point the emergence of a temporal aesthetic in cinema that arose in response to the digital era. Linking developments in cinema to current debates within philosophy, McGowan claims that films that change the viewer’s relation to time constitute a new cinematic mode: atemporal cinema.
In atemporal cinema, formal distortions of time introduce spectators to an alternative way of experiencing existence in time—or, more exactly, a way of experiencing existence out of time. McGowan draws on contemporary psychoanalysis, particularly Jacques Lacan, to argue that atemporal cinema unfolds according to the logic of the psychoanalytic notion of the drive rather than that of desire, which has conventionally been the guiding concept of psychoanalytic film studies.
Despite their thematic diversity, these films distort chronological time with a shared motivation: to reveal the logic of repetition. Like psychoanalysis, McGowan contends, the atemporal mode locates enjoyment in the embrace of repetition rather than in the search for the new and different.
AUTHOR BIOGRAPHY
Todd McGowan is associate professor of film studies at the University of Vermont. He is the author of The Impossible David Lynch and The Real Gaze: Film Theory after Lacan.
REVIEWS

"With its unique mixture of detailed apercus and large synthetic visions, Todd McGowan’s new book will finally establish him as the leading US cinema theorist. Out of Time elicits in me as a fellow writer not only admiration but envy—why didn’t I write that? How could I have missed that point? But my envy is mixed with hope: with writers like McGowan, the future of cinema studies is safe!" —Slavoj Zizek


"Todd McGowan theorizes a recent moment in film history when the question of temporality is reformulated in new and unexpected ways. He describes these ‘atemporal’ films through a sequence of astonishingly brilliant readings, guided by his strong, clear grasp of psychoanalytic theory, in an account of an important trend in contemporary cinema.  Moreover, McGowan’s analysis opens up fundamental questions concerning the relationship of art and temporality more generally, and as such will be of compelling interest to a wide range of philosophers, critical theorists, and art critics." —Kenneth Reinhard, UCLA


Preface
Acknowledgments
Introduction: The Origins of the Atemporal Film
1. Temporality after The End of Time in Pulp Fiction
2. Not the Worst of All Possible Worlds: Sacrificing the Object in Butterfly Effect
3. Eternity without Sunshine: Eternal Sunshine of the Spotless Mind and the Hopelessness of Love
4. The Path to Politics in The Constant Gardener
5. “Something Is Lost”: The Ethics of Absolute Negativity in 21 Grams
6. Timeless in Space: Placing Eternity in 2046
7. Affirmation of the Lost Object: Peppermint Candy and the End of Progress
8. The Temporal Flight from Trauma: Irréversible and the Critique of Experience
Conclusion: An Infinite Memento
Notes
Index