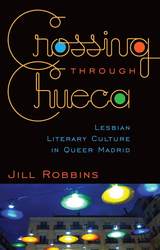 In the past two decades the city of Madrid has been marked by pride, feminism, and globalization—but also by the vestiges of the machismo nurtured during the long years of the Franco dictatorship. Crossing through Chueca examines how lesbian literary culture fares in this mix from the end of the countercultural movement la movida madrileña in 1988 until the gay marriage march in 2005.
Jill Robbins traverses the various literary spaces of the city associated with queer culture, in particular the gay barrio of Chueca, revealing how it is a product of interrelations—a site crisscrossed by a multiplicity of subjects who constitute it as a queer space through the negotiation of their sexual, racial, gender, and class identities. Robbins recognizes Chueca as a political space as well, a refuge from homophobia. She also shows how the spatial and literary practices of Chueca relate to economic issues.
In examining how women’s sexual identities have become visible in and through the Chueca phenomenon, this work is a revealing example of transnational queer studies within the broader Western discussion on gender and sexuality.
AUTHOR BIOGRAPHY
Jill Robbins is associate professor of Spanish literature and culture at the University of Texas, at Austin.
REVIEWS

"With sharp and original analysis, Jill Robbins offers for the first time a profound investigation of the role of not only the formation of an urban gay community, but also of the participation of a local gay/lesbian bookstore on the visibility of lesbian culture and experience in Spain." —Inmaculada Pertusa, coeditor of Tortilleras: Latina Lesbians


"Reflecting a deep and insightful grasp of Spanish queer studies, Crossing through Chueca focuses on the increasingly globalized queer identity and book market in Spain, examining the changing publishing trends of the 1990s and its relationship to women writers." —Tatjana Pavlovic, author of The Mobile Nation (1954-1964): España cambia de piel


"Crossing through Chueca is a historically grounded, theoretically agile, and politically engaged exploration of a place and time marked as much by the triumphant rhetoric of democratic consolidation as by the troubling persistence of repressive tolerance." —Brad Epps, professor of Romance Languages and Literatures and Women, Gender, and Sexuality Studies at Harvard University