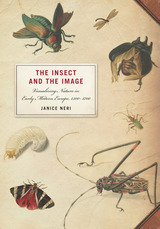 Once considered marginal members of the animal world (at best) or vile and offensive creatures (at worst), insects saw a remarkable uptick in their status during the early Renaissance. This quickened interest was primarily manifested in visual images—in illuminated manuscripts, still life paintings, the decorative arts, embroidery, textile design, and cabinets of curiosity. In The Insect and the Image, Janice Neri explores the ways in which such imagery defined the insect as a proper subject of study for Europeans of the early modern period.

It was not until the sixteenth century that insects began to appear as the sole focus of paintings and drawings—as isolated objects, or specimens, against a blank background. The artists and other image makers Neri discusses deployed this “specimen logic” and so associated themselves with a mode of picturing in which the ability to create a highly detailed image was a sign of artistic talent and a keenly observant eye. The Insect and the Image shows how specimen logic both reflected and advanced a particular understanding of the natural world—an understanding that, in turn, supported the commodification of nature that was central to global trade and commerce during the early modern era.

Revealing how sixteenth- and seventeenth-century artists and image makers shaped ideas of the natural world, Neri’s work enhances our knowledge of the convergence of art, science, and commerce today.

Janice Neri is associate professor of the history of art and visual culture at Boise State University.

II. New Worlds and New Selves
4. Between Observation and Image: Representations of Insects in Robert Hooke’s
Micrographia
5. Stitches, Specimens, and Pictures: Maria Sibylla Merian and the Processing of the
Natural World