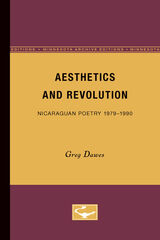 The distinction in North Atlantic cultures between aesthetics and politics, argues Greg Dawes, is artificially constructed because it does not take into account the socially based origins of these spheres. Although it is true that intellectuals and artists often function as politicians or diplomats in Latin America and that they are relegated to an autonomous realm in North America, the fact remains that aesthetics in both regions is embedded in sociohistorical events.