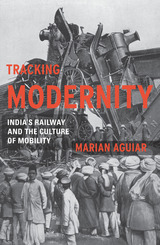 From Mohandas Gandhi’s nineteenth-century tour in a third-class compartment to the recent cinematic shenanigans of Wes Anderson’s The Darjeeling Limited, the railway has been one of India’s most potent emblems of modern life. In the first in-depth analysis of representations of the Indian railway, Marian Aguiar interprets modernity through the legacy of this transformative technology.
Since the colonial period in India, the railway has been idealized as a rational utopia—a moving box in which racial and class differences might be amalgamated under a civic, secular, and public order. Aguiar charts this powerful image into the postcolonial period, showing how the culture of mobility exposes this symbol of reason as surprisingly dynamic and productive. Looking in turn at the partition of India, labor relations, rituals of travel, works of literature and film, visual culture, and the Mumbai train bombings of 2006, Aguiar finds incongruities she terms “counternarratives of modernity” to signify how they work both with and against the dominant rhetoric.  Revealing railways as a microcosm of tensions within Indian culture, Aguiar demonstrates how their representations have challenged prevailing ideas of modernity.
AUTHOR BIOGRAPHY
Marian Aguiar is associate professor in the Literary and Cultural Studies Program of the English department at Carnegie Mellon University.
REVIEWS

"In Tracking Modernity, Marian Aguiar demonstrates a compelling grasp of the complex discourses around and about India’s railway and its imbrication in the contested discourses of modernity, mobility, and migration. Aguiar offers both a panoramic and a concentrated view of the many modes of representation of the scene of the train, the spaces of the train, and the railway platform. Historically grounded, theoretically sophisticated, and clearly articulated, Tracking Modernity takes us on a journey through the Indian landscape as it changes from colonial depictions, to postcolonial destinations constantly underlining the violence and terror that the train conjures for the Indian imagination alongside its endless capacity for restless movement." —Sangeeta Ray, University of Maryland


Preface
Introduction: Tracking Modernity
1. The Permanent Way: Colonial Discourse of the Railway
2. The Machine of Empire: Technology and Decolonization
3. Partition and the Death Train
4. New Destinations: the Image of the Postcolonial Railway
5. Bollywood on the Train
Conclusion: Terrorism and the Railway
Acknowledgments
Notes
Bibliography
Filmography
Index