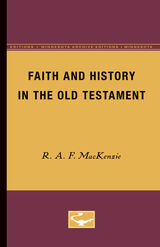 Faith and History in the Old Testament was first published in 1963. Minnesota Archive Editions uses digital technology to make long-unavailable books once again accessible, and are published unaltered from the original University of Minnesota Press editions.

This absorbing and readable account of the religion of ancient Israel is presented against the background of other cultures of the time. Father MacKenzie traces the development of Israel's belief and draws upon modern knowledge of the cultures of the ancient Near East to illuminate the history. But the main stress is on the religious meaning which the Israelites themselves perceived in the events they experienced, a meaning which is accepted and extended in different ways by modern Jews and by Christians.

The author explains, in non-technical style, the distinctive features of the faith of the Old Testament as evident in such themes as covenant, creation, retribution, the pursuit of wisdom, and the hope of salvation. At the outset, he defines the study of theology and places the study of Chrisson with that of Israel. He analyzes Israel's concept of God and the character of the covenant between God and the people of Israel, discusses the Israelite literature on the creation of earth and its creatures, and considers the interrelationship between myth and history. He discusses the search for wisdom in Israel, the public prayers, and the concept of a promise from the deity. In conclusion, he presents the interpretation by the Old Testament authors of these distinctive features of Israel's religion.

The book is intended for lay people interested in modern Bible interpretation, as well as for priests, ministers, and rabbis who wish a general survey of the Old Testament. It is suitable for use as a text or supplementary reading in religion or theology courses.

AUTHOR BIOGRAPHY
Father MacKenzie, a Jesuit priest, was a professor of Old Testament exegesis at Regis College, Ontario, Canada. He is the author of another work, Introduction to the New Testament.