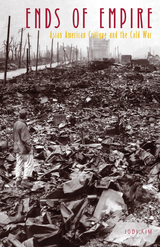 Ends of Empire examines Asian American cultural production and its challenge to the dominant understanding of American imperialism, Cold War dynamics, and race and gender formation.

Jodi Kim demonstrates the degree to which Asian American literature and film critique the record of U.S. imperial violence in Asia and provides a glimpse into the imperial and gendered racial logic of the Cold War. She unfolds this particularly entangled and enduring episode in the history of U.S. global hegemony—one that, contrary to leading interpretations of the Cold War as a simple bipolar rivalry, was significantly triangulated in Asia.

The Asian American works analyzed here constitute a crucial body of what Kim reveals as transnational “Cold War compositions,” which are at once a geopolitical structuring, an ideological writing, and a cultural imagining. Arguing that these works reframe the U.S. Cold War as a project of gendered racial formation and imperialism as well as a production of knowledge, Ends of Empire offers an interdisciplinary investigation into the transnational dimensions of Asian America and its critical relationship to Cold War history.
AUTHOR BIOGRAPHY

Jodi Kim is assistant professor of ethnic studies at the University of California, Riverside.