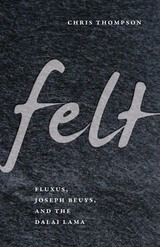 Felt provides a nonlinear look at the engagement of the postwar avant-garde with Eastern spirituality, a context in which the German artist Joseph Beuys appears as an uneasy shaman. Centered on a highly publicized yet famously inconclusive 1982 meeting between Beuys and the Dalai Lama, arranged by the Dutch artist Louwrien Wijers, Chris Thompson explores the interconnections among Beuys, the Fluxus movement, and Eastern philosophy and spiritual practice.
Building from the resonance of felt, the fabric, in both Tibetan culture and in Beuys’s art, Thompson takes as his point of departure Deleuze and Guattari’s discussion in A Thousand Plateaus of felt as smooth space that is “in principle infinite, open, and unlimited in every direction,” its structure determined by chance as opposed to the planned, woven nature of most fabrics. Felt is thus seen as an alternative to the model of the network: felt’s anarchic form is not reducible to the regularity of the net, grid, or mesh, and the more it is pulled, tweaked, torn, and agitated, the greater its structural integrity.
Felt thus invents its methodology from the material that represents its object of inquiry and from this advances a reading of the avant-garde. At the same time, Thompson demonstrates that it is sometimes the failures of thought, the disappointing meetings, even the untimely deaths that open portals through which life flows into art and allows new conjunctions of life, art, and thought. Thompson explores both the well-known engagement of Fluxus artists with Eastern spirituality and the more elusive nature of Beuys’s own late interest in Tibetan culture, arriving at a sense of how such noncausal interactions—interhuman intrigue—create culture and shape contemporary art history.
AUTHOR BIOGRAPHY
Chris Thompson is associate professor of art history at the Maine College of Art.
REVIEWS
"Felt introduces us to a new generation of experimental performance scholars, seeking simultaneously art historical, experiential, and poetic points of entry into the important art of our time. Chris Thompson clearly has a defining role to play in this process and does it with aplomb."—Hannah Higgins, author of Fluxus Experience


"In the end, Felt is a letter lovingly recounting the often fragile moments in which artists have put themselves on the line to try to bring about a transformation in the human spirit. Thompson’s answer to his own question—‘what happens when nothing happens?’—seems to be, quite a lot."—Andrew Murphie, co-author of Culture and Technology