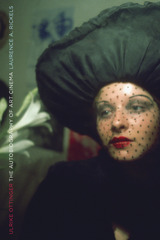 Since 1974, German filmmaker Ulrike Ottinger has created a substantial body of films that explore a world of difference defined by the tension and transfer between settled and nomadic ways of life. In many of her films, including Exile Shanghai, an experimental documentary about the Jews of Shanghai, and Joan of Arc of Mongolia, in which passengers on the Trans-Siberian Express are abducted by Mongolian bandits, she also probes the encounter with the other, whether exotic or simply unpredictable.

In Ulrike Ottinger Laurence A. Rickels offers a series of sensitive and original analyses of Ottinger’s films, as well as her more recent photographic artworks, situated within a dazzling thought experiment centered on the history of art cinema through the turn of the twenty-first century. In addition to commemorating the death of a once-vital art form, this book also affirms Ottinger’s defiantly optimistic turn toward the documentary film as a means of mediating present clashes between tradition and modernity, between the local and the global.

Widely regarded as a singular and provocative talent, Ottinger’s conspicuous absence from critical discourse is, for Rickels, symptomatic of the art cinema’s demise. Incorporating interviews he conducted with Ottinger and illustrated with stunning examples from her photographic oeuvre, this book takes up the challenges posed by Ottinger’s filmography to interrogate, ultimately, the very practice-and possibility-of art cinema today.

Laurence A. Rickels is professor of German and comparative literature at the University of California, Santa Barbara, and the author of several books, including The Case of California, The Vampire Lectures, and the three-volume Nazi Psychoanalysis (all published by Minnesota). He is a recognized art writer whose reflections on contemporary visual art appear regularly in numerous exhibition catalogues as well as in Artforum, artUS, and Flash Art.