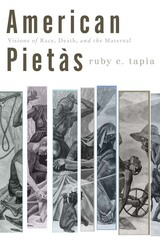 In American Pietàs, Ruby C. Tapia reveals how visual representations of racialized motherhood shape and reflect national citizenship. By means of a sustained engagement with Roland Barthes’s suturing of race, death, and the maternal in Camera Lucida, Tapia contends that the contradictory essence of the photograph is both as a signifier of death and a guarantor of resurrection.
Tapia explores the implications of this argument for racialized productions of death and the maternal in the context of specific cultural moments: the commemoration of Princess Diana in U.S. magazines; the intertext of Toni Morrison’s and Hollywood’s Beloved; the social and cultural death in teen pregnancy, imaged and regulated in California’s Partnership for Responsible Parenting campaigns; and popular constructions of the “Widows of 9/11” in print and televisual journalism.
Taken together, these various visual media texts function in American Pietàs as cultural artifacts and as visual nodes in a larger network of racialized productions of maternal bodies in contexts of national death and remembering. To engage this network is to ask how and toward what end the racial project of the nation imbues some maternal bodies with resurrecting power and leaves others for dead. In the spaces between these different maternities, says Tapia, U.S. citizen-subjects are born—and reborn.
AUTHOR BIOGRAPHY
Ruby C. Tapia is associate professor of comparative studies and women’s studies at Ohio State University.
REVIEWS

"American Pietàs offers a compelling analysis of racialized concepts of motherhood in American narratives of identity, history, and memory. Looking at both the construction of whiteness and racial otherness, Ruby C. Tapia attends to the intersections of race and gender in visual representations of national subjectivity. This is an extremely important intervention that interrogates, rather than simply references, the centrality of racialized motherhood to national identities." —Wendy Kozol, Oberlin College


"Ruby C. Tapia combines historical depth with subtle theoretical sophistication in her close readings of contemporary visual texts. Rarely are scholars able to read contemporary texts with such nuance and sustained insight, illuminating their wide-ranging importance in processes of self-identification and the production of national belonging." —Shawn Michelle Smith, School of the Art Institute of Chicago