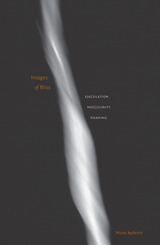 Aristotle believed semen to be the purest of all bodily secretions, a vehicle for the spirit or psyche that gives form to substance. For Proust’s narrator in Swann’s Way, waking to find he has experienced a nocturnal emission, it is the product of “some misplacing of my thigh.” The heavy metal band Metallica used it to adorn an album cover. Beyond its biological function, semen has been applied with surprising frequency to metaphorical and narratological purposes.

In Images of Bliss, Murat Aydemir undertakes an original and extensive analysis of images of male orgasm and semen. In a series of detailed case studies—Aristotle’s On the Generation of Animals; Andres Serrano’s use of bodily fluids in his art; paintings by Holbein and Leonardo; Proust’s In Search of Lost Time; hard-core pornography (both straight and gay); and key texts from the poststructuralist canon, including Lacan on the phallus, Bataille on expenditure, Barthes on bliss, and Derrida on dissemination—Aydemir traces the complex and often contradictory possibilities for imagination, description, and cognition that both the idea and the reality of semen make available. In particular, he foregrounds the significance of male ejaculation for masculine subjectivity. More often than not, Aydemir argues, the event or object of ejaculation emerges as the instance through which identity, meaning, and gender are not so much affirmed as they are relentlessly and productively questioned, complicated, and displaced.

Combining close readings of diverse works with subtle theoretical elaboration and a keen eye for the cultural ideals and anxieties attached to sexuality, Images of Bliss offers a convincing and long overdue critical exploration of ejaculation in Western culture.

Murat Aydemir is assistant professor of comparative literature at the University of Amsterdam.