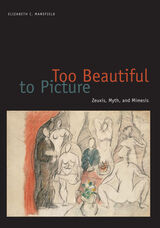 Few tales of artistic triumph can rival the story of Zeuxis. As first reported by Cicero and Pliny, the painter Zeuxis set out to portray Helen of Troy, but when he realized that a single model could not match Helen’s beauty, he combined the best features of five different models. A primer on mimesis in art making, the Zeuxis myth also illustrates ambivalence about the ability to rely on nature as a model for ideal form.In Too Beautiful to Picture, Elizabeth C. Mansfield engages the visual arts, literature, and performance to examine the desire to make the ideal visible. She finds in the Zeuxis myth evidence of a cultural primal scene that manifests itself in gendered terms. Mansfield considers the many depictions of the legend during the Renaissance and questions its absence during the eighteenth century. Offering interpretations of Angelica Kauffman’s paintings, Mary Shelley’s Frankenstein, and Picasso’s Les Demoiselles d’Avignon, Mansfield also considers Orlan’s carnal art as a profound retelling of the myth. Throughout, Mansfield asserts that the Zeuxis legend encodes an unconscious record of the West’s reliance on mimetic representation as a vehicle for metaphysical solace.Elizabeth C. Mansfield is associate professor of art history at the University of the South.
TABLE OF CONTENTS