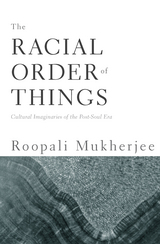 Why did affirmative action programs implemented during the sixties and seventies suffer vicious assaults in the nineties? How were culturally resonant appeals to individualism and colorblindness turned around during the nineties to epitomize a “toxic system of quotas, preference, and set-asides”?In The Racial Order of Things, Roopali Mukherjee analyzes reversals and reinterpretations that mark the turn from the civil rights era of the sixties to the post-soul decade of the nineties. She begins by surveying a series of intractable disagreements over race- and gender-based social justice that have played out over the past decade, framed by the 1996 passage of California’s Proposition 209 and the 2003 Supreme Court decision on admissions criteria at the University of Michigan. Examining political campaigns for and against affirmative action as well as films about dilemmas of gender and race in the mythic meritocracy, the book exposes a remarkable discursive tug-of-war over antidiscrimination policies during the nineties.Highlighting the ways in which categories such as “blackness” and “women” have operated in these debates, Mukherjee sees the public policy process as a key site where cultural identities are formed, recognized, and discarded. Considering mainstream media, including Hollywood films like Disclosure, G.I. Jane, Courage under Fire, and The Contender, Mukherjee focuses on conflicts following the introduction of women and blacks into the workplace. She explores the politics of public memory about the civil rights era through the lens of feature film, documentary, and network news. Using newspaper articles and legislative records, Mukherjee provides a comparative reading of narratives and counternarratives of the debate surrounding the 1964 Civil Rights Act and anti–affirmative action campaigns of the neoliberal nineties.Balancing policy narrative, cinematic reading, and conceptual analysis, Mukherjee demonstrates a shifting and paradoxical racial order that explains how the cultural authority and political career of affirmative action remains in flux, thoroughly contested, and contradictory.Roopali Mukherjee is assistant professor of media studies at Queens College of the City University of New York.