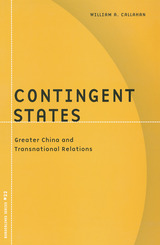 In the 1990s, Greater China became the subject of debate as the site of either the danger of the “China threat” or the promise of Confucian capitalism. William A. Callahan argues that Greater China presents challenges not only to economic and political order but also to international relations theory. In fact, Greater China, though absent from geopolitical maps and international law, is very much present in economic and cultural exchange and exemplifies the contingent state of international politics. Callahan deconstructs the mainstream geopolitical and political-economic understandings of Greater China, tracing its emergence through an ethnographic analysis of four political “problems” in East Asia: the South China Sea disputes, Sino-Korean relations, the return of Hong Kong, and cross-straits relations. Callahan shows how bureaucrats, outlaws, tycoons, academics, workers, politicians, and hooligans alike produce Greater China through networks of relations in local, national, regional, global, and transnational space. Finally, Contingent States reveals how each of the “problems” provoked theoretical innovations that depart from standard conceptions of sovereignty, democracy, and the nation-state.William A. Callahan is senior lecturer of international politics and deputy director of the Center for Contemporary Chinese Studies at the University of Durham, England, and the author of Imagining Democracy: Reading “The Events of May” in Thailand and Pollwatching, Elections, and Civil Society in Southeast Asia.
TABLE OF CONTENTS