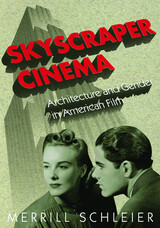 Whether tall office buildings, high-rise apartments, or lofty hotels, skyscrapers have been stars in American cinema since the silent era. Cinema’s tall buildings have been variously represented as unbridled aspiration, dens of iniquity and eroticism, beacons of democracy, and well-oiled corporate machines. Considering their intriguing diversity, Merrill Schleier establishes and explains the impact of actual skyscrapers on America’s ideologies about work, leisure, romance, sexual identity, and politics as seen in Hollywood movies.

Schleier analyzes cinematic works in which skyscrapers are an integral component, interpreting the iconography and spatial practices in these often fictional modern buildings, especially on concepts of gender. Organized chronologically and thematically, she offers close readings of films including Safety Last, Skyscraper Souls, Wife vs. Secretary, Baby Face, The Fountainhead, and Desk Set. Opening with the humorous antics of Harold Lloyd, the premier skyscraper actor of the silent era, the book moves through the disillusionment of the Depression era, in which skyscrapers are employed as players in moralistic, class-conscious stories, to post–World War II and its reimagining of American political and economic values and ends with the complicated prosperity of the 1950s and the lives of white-collar workers and their spouses.

Taking inspiration from Walter Benjamin’s Arcades Project, among works of other critical theorists, Schleier creates in this book a model for understanding architecture as a purveyor of desire and class values and, ultimately, contributes broadly to thinking on the rich intersection of the built environment, cinema, and gender.
AUTHOR BIOGRAPHY
Merrill Schleier is professor of art, architectural history, and film studies at the University of the Pacific. She is author of The Skyscraper in American Art.
REVIEWS

"In-depth and rigorous, Schleier‘s historical framework is more than simply a convenient temporal grid. Furnishing the reader with diegetic as well as external reference points, Schleier makes a strong case for these films as producers of culture at the same time as they can be seen to emerge from within a certain cultural context. Her research extends well beyond the screen." —Scope