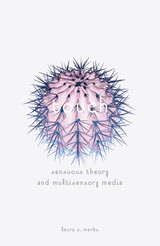 Proposes a revolutionary approach to the interpretation of art, film, and the digital.

In Touch, Laura U. Marks develops a critical approach more tactile than visual, an intensely physical and sensuous engagement with works of media art that enriches our understanding and experience of these works and of art itself.

These critical, theoretical, and personal essays serve as a guide to developments in nonmainstream media art during the past ten years-sexual representation debates, documentary ethics, the shift from analog to digital media, a new social obsession with smell. Marks takes up well-known artists like experimental filmmaker Ken Jacobs and mysterious animators the Brothers Quay, and introduces groundbreaking, lesser-known film, video, and digital artists.

Laura U. Marks, associate professor of film studies at Carleton University, Ottawa, is a critic and curator of artists' independent media. She is the author of The Skin of the Film (2000).