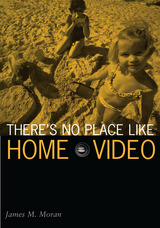 Defines, examines, and elevates home video to its rightful place.

From its recording of family events to its influence on filmmaking, home video defies easy categorization and demands serious consideration. In There's No Place Like Home Video, James Moran takes on this neglected aspect of popular culture. Moran offers a cultural history of amateur home video, exploring its technological and ideological predecessors, the development of event videography, and home video's symbiotic relationship with television and film. He also investigates the broader field of video, taking on the question of medium specificity: the attempt to define its unique identity, to capture what constitutes its pure practice.

In Moran's discussion of video, he argues that previous scholars have not sufficiently dealt with its nature as hybrid, varied, and mutable. He argues that such a medium shouldn't be conceived as pure in and of itself; it is neither autonomous from other media nor entirely dependent on any other, but instead has a chameleonlike interface with films, television, computers, telephones, and even architecture. Rather than look for a grand narrative to define its specificity, Moran places video and home video at the intersections of multiple forms of communication.

James M. Moran is adjunct professor of visual and media arts at Emerson College in Los Angeles.
TABLE OF CONTENTS