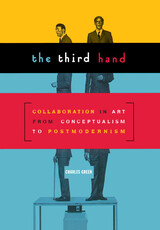 A major reevaluation of collaboration's role in art since 1968.

The lone artist is a worn clichÃ© of art history but one that still defines how we think about the production of art. Since the 1960s, however, a number of artists have challenged this image by embarking on long-term collaborations that dramatically altered the terms of artistic identity. In The Third Hand, Charles Green offers a sustained critical examination of collaboration in international contemporary art, tracing its origins from the evolution of conceptual art in the 1960s into such stylistic labels as Earth Art, Systems Art, Body Art, and Performance Art. During this critical period, artists around the world began testing the limits of what art could be, how it might be produced, and who the artist is. Collaboration emerged as a prime way to reframe these questions.

Green looks at three distinct types of collaboration: the highly bureaucratic identities created by Joseph Kosuth, Ian Burn, Mel Ramsden and other members of Art & Language in the late 1960s; the close-knit relationships based on marriage or lifetime partnership as practiced by the Boyle Family--Anne and Patrick Poirier, Helen Mayer Harrison and Newton Harrison; and couples-like Christo and Jeanne-Claude, Gilbert & George, or Marina Abramovic and Ulay--who developed third identities, effacing the individual artists almost entirely. These collaborations, Green contends, resulted in new and, at times, extreme authorial models that continue to inform current thinking about artistic identity and to illuminate the origins of postmodern art, suggesting, in the process, a new genealogy for art in the twenty-first century.

"Green makes an original and important contribution to the study of western art of the second half of the twentieth century. A valuable book for all readers." --Art & Australia