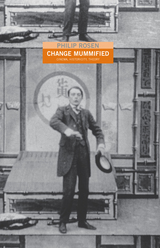 An innovative study of the intersections between history and film.


Exploring the modern category of history in relation to film theory, film textuality, and film history, Change Mummified makes a persuasive argument for the centrality of historicity to film as well as the special importance of film in historical culture. What do we make of the concern for recovering the past that is consistently manifested in so many influential modes of cinema, from Hollywood to documentary and postcolonial film? How is film related to the many modern practices that define themselves as configuring pastness in the present, such as architectural preservation, theme parks, and, above all, professional historical research? What is the relation of history in film to other media such as television and digital imaging? How does emphasizing the connection between film and modern historicity affect the theorization and historicization of film and modern media culture?

Pursuing the full implications of film as cultural production, Philip Rosen reconceptualizes modern historicity as a combination of characteristic epistemological structures on the one hand, and the social imperative to regulate or manage time on the other. Emphasizing a fundamental constellation of pursuit of the real, indexical signification and the need to control time, he interrogates a spectrum of film theory and film texts. His argument refocuses the category of temporality for film and cultural theory while rethinking the importance of historicity.

An original and sustained meditation on the historiographic status of cinematic signs, Change Mummified is both an intervention in film and media studies and an argument for the continuing necessity of modern historical thinking in its contradictions.

Philip Rosen is a professor of modern culture and media and of English at Brown University.
TABLE OF CONTENTS