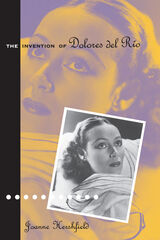 Dolores del Río first came to Hollywood from Mexico in 1925 and within a year had become an international star for her role in Raoul Walsh's 1926 film What Price Glory. She would go on to work with Hollywood’s top directors, including John Ford and King Vidor, and star opposite such leading men as Henry Fonda, Fred Astaire, Orson Welles (with whom she had a scandalous affair), and Elvis Presley. Voted by Photoplay magazine in 1933 as having "the most perfect feminine figure in Hollywood," del Río was billed as one of cinema’s most "exotic" and "aristocratic" beauties. This image-carefully crafted by her producers, her studio publicists, and by del Río herself-reveals many fascinating insights into Hollywood’s evolving attitudes toward race and femininity.

In The Invention of Dolores del Río, Joanne Hershfield explores the intersection of ethnicity, gender, and stardom in American popular culture through the lens of del Río’s successful and unusually lengthy career, which lasted until the 1960s. Hershfield offers close readings of del Río’s films—discussing in detail the roles she played, her costumes and makeup, the music and mise-en-scène, advertising, publicity, and reviews—that provide a nuanced understanding of how Hollywood constructed del Río as an exotic commodity and blunted the inherent challenge her sexual and ethnic image posed to both prevailing standards of white femininity and widespread injunctions against miscegenation. Throughout this astute and imaginative case study, Hershfield looks at del Río’s Hollywood films in relation to shifting ideologies about nationality, gender, and race between the 1920s and 1960s, offering an important contribution to the debate surrounding Hollywood’s ability to both reflect the nation’s racial and sexual obsessions and influence its perceptions about ethnic and gender identity.

Joanne Hershfield is associate professor in the Department of Communication Studies at the University of North Carolina at Chapel Hill and author of Mexican Cinema/Mexican Woman, 1940-1950 (1996).