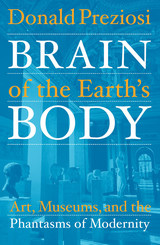 A major scholar considers the role of the museum in art history.

What begins as a meditation on "the museum" by one of the world's leading art historians becomes, in this book, a far-reaching critical examination of how art history and museums have guided and controlled not only the way we look at art but the ways in which we understand modernity itself.

Originally delivered as the 2001 Slade Lectures in the Fine Arts at Oxford University, the book makes its deeply complex argument remarkably accessible and powerfully clear. Concentrating on a period from the beginning of the nineteenth century to the beginning of the twentieth, Donald Preziosi presents case studies of major institutions that, he argues, have defined--and are still defining--the possible limits of museological and art historical theory and practice. These include Sir John Soane's Museum in London, preserved in its 1837 state; the Crystal Palace Exhibition of 1851; and four museums founded by Europeans in Egypt in the late nineteenth century, which divided up that country's history into "ethnically marked" aesthetic hierarchies and genealogies that accorded with Europe's construction of itself as the present of the world's past, and the "brain of the earth's body."

Through this epistemological and institutional archaeology, Preziosi unearths the outlines of the more radical Enlightenment project that academic art history, professional museology, and art criticism have rendered marginal or invisible. Finally, he sketches a new theory about art, artifice, and visual signification in the cracks and around the margins of the "secular theologisms" of the globalized imperial capital called modernity.

Addressed equally to the theoretical and philosophical foundations of art history, museology, history, and anthropology, this book goes to the heart of recent debates about race, ethnicity, nationality, colonialism, and multiculturalisms-and to the very foundations of modernity and modern modes of knowledge production.

Donald Preziosi is professor of art history at the University of California, Los Angeles, and research associate in art history and visual culture at Oxford University. He is the author and editor of numerous books, including The Art of Art History (1998).