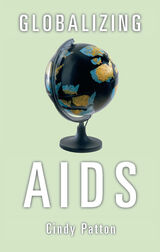 A long-awaited look at responses to the AIDS epidemic in relation to globalization.

As AIDS began to appear around the "global village" in the early 1980s, the closeness brought by new technologies no longer promised wondrous cultural exchange; instead it made possible the transmission of a frightening new kind of disease. International scientific institutions and news organizations quickly constructed a "place" for AIDS in the global imaginary: from the heart of Africa and gay bathhouses in San Francisco to the back streets of Southeast Asia and poverty-stricken neighborhoods in the United States. Such simplistic accounts helped recycle racist ideas about Africans and Asians, intensified homophobic visions of irresponsible gay sexuality, and ignored the scientific and human reality of local experiences of the epidemic.

In Globalizing AIDS, pioneering cultural critic Cindy Patton looks at the complex interaction between modern science, media coverage, and local activism during the first decade of the epidemic. Patton's critique of both the production of scientific credibility and the implementation of public health policy at the local level offers a bold reevaluation of how we think about AIDS and an innovative approach to the reality of the disease.

Cindy Patton is a Winship Distinguished Researcher at Emory University. She is the author of Fatal Advice (1996) and Inventing AIDS (1990).
TABLE OF CONTENTS