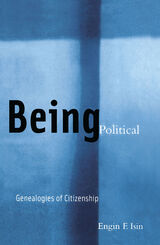 A provocative counterhistory-and a bold new approach-to notions of citizenship.

What does it mean to be political? Every age has based its answer on citizenship, bequeathing us such indelible images as that of the Greek citizen exercising his rights and obligations in the agora, the Roman citizen conducting himself in the forum, medieval citizens receiving their charter before the guildhall. Being Political disrupts these images by approaching citizenship as otherness, presenting a powerful critique of universalistic and orientalist interpretations of the origins of citizenship and a persuasive alternative history of the present struggles over citizenship.

Who were the strangers and outsiders of citizenship? What strategies and technologies were invented for constituting those forms of otherness? Focusing on these questions, rather than on the images conveyed by history's victors, Being Political offers a series of genealogies of citizenship as otherness. Engin F. Isin invokes the city as a "difference machine," recovering slaves, peasants, artisans, prostitutes, vagabonds, savages, flextimers, and squeegee men in the streets of the polis, civitas, metropolis, and cosmopolis. The result is a challenge to think in bolder terms about citizenship at a time when the nature of citizenship is an increasingly open question.

Engin F. Isin is associate professor in the Division of Social Science at York University in Toronto.