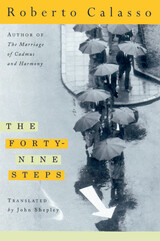 In books lauded as "brilliant,"* "exhilarating,"** and "profound,"*** Roberto Calasso has revealed the unexpected intersections of ancient and modern through topics ranging from Greek and Indian mythology to what a legendary African kingdom can tell us about the French Revolution. In this first translation of his most important essays, Calasso brings his powerful intellect and elegant prose style to bear on the essential thinkers of our time, providing a sweeping analysis of the current state of Western culture.

"Forty-nine steps" refers to the Talmudic doctrine that there are forty-nine steps to meaning in every passage of the Torah. Employing this interpretive approach, Calasso offers a "secret history" of European literature and philosophy in the wake of Nietzsche, Marx, and Freud. Calasso analyzes how figures ranging from Gustav Flaubert, Gottfried Benn, Karl Kraus, Martin Heidegger, Walter Benjamin, Franz Kafka, Bertolt Brecht, and Theodor Adorno have contributed to, or been emblematic of, the current state of Western thought. The book's theme, writ large, is the power of fable-specifically, its persistence in art and literature despite its exclusion from orthodox philosophy.

In its breadth and the nature of its concerns, The Forty-nine Steps is a philosophical and literary twin to the widely-praised The Marriage of Cadmus and Harmony. Combining erudition with engaging prose and original insights, Calasso contributes a daring new interpretation of some of the most challenging writers of the past 150 years.

John Shepley is a freelance writer and translator who lives in New York City. His translation of Pasolini's Roman Nights and Other Stories won the first Italo Calvino Translation Award in 1987.