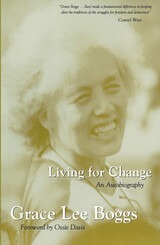 Living For Change: An Autobiography
by Grace Lee Boggs
University of Minnesota Press, 1998
Paper: 978-0-8166-2955-8
"Grace Lee Boggs has made a fundamental difference in keeping alive the traditions of the struggles for freedom and democracy." Cornel West

"More than a deeply moving memoir, this is a book of revelation. Grace Lee Boggs, Chinese American, middle class, highly educated, discovers through her encounters with remarkable rebels, blue collars as well as philosophers, where the body is buried: who is doing what to whom in our society. It is an adventure that is truly liberating." Studs Terkel

Living for Change is a sweeping account of the life of an untraditional radical from the end of the thirties, through the cold war, the civil rights era, and the rise of Black Power, the Nation of Islam, and the Black Panthers to the present efforts to rebuild our crumbling urban communities. This fascinating autobiography traces the story of a woman who transcended class and racial boundaries to pursue her passionate belief in a better society.

Grace Lee Boggs was raised in New York City during a time when her father was not allowed to buy land for their home because he was Chinese. Educated at Barnard and Bryn Mawr, Boggs was in her twenties when radical politics beckoned, and she was inspired to become a revolutionary focusing on the black community.

During her early years as an activist in New York, Boggs began a twenty-year friendship and collaboration with C. L. R. James, the brilliant and influential West Indian Marxist to whom she devotes a revelatory chapter of this book. In 1953, she moved to Detroit where, she writes, "radical history had been made and could be made again." It was also the home of James Boggs, an African American auto worker (and later author and revolutionary theoretician) who would become one of the movement's freshest and most persuasive voices, as well as Grace's husband. Beginning with their work together on the newsletter Correspondence, Grace and James formed the core of a network that over the years would include Malcolm X, Lyman Paine, Ping Ferry, Ossie Davis and Ruby Dee, Kwame Nkrumah, Stokely Carmichael, and inner-city youth.

Rich in the personalities and anecdotes of twentieth-century progressive activism, Living for Change is an involving and inspiring look at a remarkable woman who continues to dedicate her life to social justice.

Grace Lee Boggs is a first-generation Chinese American who has been a speaker, writer, and movement activist in the African American community for fifty-five years.