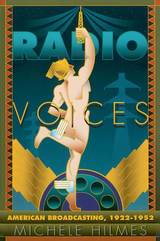 Radio Voices: American Broadcasting, 1922-1952
by Michele Hilmes
University of Minnesota Press, 1997
Paper: 978-0-8166-2621-2
The Shadow. Fibber McGee and Molly. Amos 'n' Andy. When we think back on the golden age of radio, we think of the shows. In Radio Voices, Michele Hilmes looks at the way radio programming influenced and was influenced by the United States of the 1920s, 1930s, and 1940s, tracing the history of the medium from its earliest years through the advent of television.

Hilmes places the development of radio within the context of the turmoils of the 1920s: immigration and urbanization, the rise of mass consumer culture, and the changing boundaries of the public and private spheres. Early practices and structures--the role of the announcer, the emergence of program forms from vaudeville, minstrel shows, and the concert stage--are examined.

Central to Radio Voices is a discussion of programs and their relations to popular understandings of race, ethnicity, and gender in the United States of this era. Hilmes explores Amos 'n' Andy and its negotiations of racial tensions and The Rise of the Goldbergs and its concern with ethnic assimilation. She reflects upon the daytime serials--the first soap operas--arguing that these much-disparaged programs provided a space in which women could discuss conflicted issues of gender. Hilmes also explores industry practices, considering the role of advertising agencies and their areas of conflict and cooperation with the emerging networks as well as the impact of World War II on the "mission" of radio.

Radio Voices places the first truly national medium of the United States in its social context, providing an entertaining account of the interplay between programming and popular culture.

"Radio Voices is the most-cited publication in a recent spate of cultural studies of radio. Hilmes analyzes the early practices and programs of radio-such as the daytime serial drama that would evolve into the soap opera-in relation to the emergence, after World War I, of mass consumerism. She argues that, as the United States rose to world power during the Age of Radio, the medium was crucial in helping to form an American national identity and to blur the boundaries between the public and private spheres." Chronicle of Higher Education

"Hilmes offers a fresh, exciting, path-breaking and insightful history of radio broadcasting. Radio Voices provides an innovative and accessible history of U.S. broadcasting that promises to inspire a new wave of critical cultural analysis of the radio era. Radio Voices may prove to be the most important for the research it promises to inspire by rethinking and enlivening the field of radio history." Journal of Communication

"The title, Radio Voices, is well chosen: the voices of the radio pioneers, which one might too easily assume to be irrecoverable, emerge through the book's frequent extracts from correspondence and scripts. Radio Voices will remind scholars of popular culture of the pleasures and rewards of archival study." Journal of American History

"The author's extensive research has turned up many delicious tales not recounted elsewhere." Historical Journal of Film, Radio, and Television