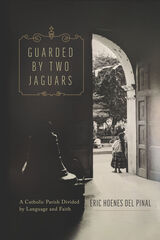 In communities in and around Cobán, Guatemala, a small but steadily growing number of members of the Q’eqchi’ Maya Roman Catholic parish of San Felipe began self-identifying as members of the Catholic Charismatic Renewal. Their communities dramatically split as mainstream and charismatic Catholic parishioners who had been co-congregants came to view each other as religiously distinct and problematic “others.”

In Guarded by Two Jaguars, Eric Hoenes del Pinal tells the story of this dramatic split and in so doing addresses the role that language and gesture have played in the construction of religious identity. Drawing on a range of methods from linguistic and cultural anthropology, the author examines how the introduction of the Catholic Charismatic Renewal movement in the parish produced a series of debates between parishioners that illustrate the fundamentally polyvocal nature of Catholic Christianity. This work examines how intergroup differences are produced through dialogue, contestation, and critique. It shows how people’s religious affiliations are articulated not in isolation but through interaction with each other.

Although members of these two congregations are otherwise socially similar, their distinct interpretations of how to be a “good Catholic” led them to adopt significantly different norms of verbal and nonverbal communication. These differences became the idiom through which the two groups contested the meaning of being Catholic and Indigenous in contemporary Guatemala, addressing larger questions about social and religious change.
AUTHOR BIOGRAPHY
Eric Hoenes del Pinal is an assistant professor of religious studies at the University of North Carolina at Charlotte. He is the co-editor of Mediating Catholicism: Religion and Media in Global Catholic Imaginaries.
REVIEWS
“Hoenes del Pinal provides an insightful and most interesting study of religious tension, change, and negotiation among contemporary Maya Catholics in Guatemala. It is an important analysis of how official theology and pastoral plans are always interpreted and enacted in local contexts and a reminder that Catholicism in Latin America remains a highly diverse and ever-developing phenomenon.”—Jakob Egeris Thorsen, author of Charismatic Practice and Catholic Parish Life: The Incipient Pentecostalization of the Church in Guatemala and Latin America

“This perceptive and complex work interweaves ethnographic writing with an analysis of language and religion. With Hoenes del Pinal, you will wonder what it means to be Catholic and Indigenous in Guatemala and find that the answer lies in the details of embodied practice and discursive interaction. Written with empathy and intelligence, this book illuminates the particular situation it examines as well as larger questions of how people relate to each other and create meaning in their lives.”—Anna M. Babel, author of Between the Andes and the Amazon: Language and Social Meaning in Bolivia— -