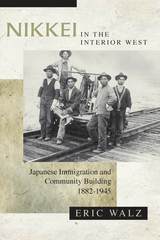 Eric Walz's Nikkei in the Interior West tells the story of more than twelve thousand Japanese immigrants who settled in the interior West--Arizona, Colorado, Idaho, Nebraska, and Utah. They came inland not as fugitives forced to relocate after Pearl Harbor but arrived decades before World War II as workers searching for a job or as picture brides looking to join husbands they had never met.

Despite being isolated from their native country and the support of larger settlements on the West Coast, these immigrants formed ethnic associations, language schools, and religious institutions. They also experienced persecution and discrimination during World War II in dramatically different ways than the often-studied immigrants living along the Pacific Coast.  Even though they struggled with discrimination, these interior communities grew both in size and in permanence to become an integral part of the American West.

Using oral histories, journal entries, newspaper accounts, organization records, and local histories, Nikkei in the Interior West explores the conditions in Japan that led to emigration, the immigration process, the factors that drew immigrants to the interior, the cultural negotiation that led to ethnic development, and the effects of World War II. Examining not only the formation and impact of these Japanese communities but also their interaction with others in the region, Walz demonstrates how these communities connect with the broader Japanese diaspora.

Eric Walz is a professor at Brigham Young University--Idaho. His published works include an introductory chapter in the book Guilt By Association: Essays on Japanese Settlement, Internment, and Relocation in the Rocky Mountain West as well as articles in Agricultural History, Idaho Yesterdays, and the Journal of Arizona History.

REVIEWS
"Walz's study provides extensive detail on the scholarship of ethnicity building. For those more interested in history and events than in historiography, the study incorporates oral histories, case studies, and statistics to reveal the personal experiences of immigrants." —Journal of Arizona History

“Eric Walz’s fine book provides a long-overdue history of the experience of Japanese immigrants in the Interior West. This a well-written, engaging, important book that should be read by all scholars of the North American West.” —Laura Woodworth-Ney, author of Women in the American West


"Eric Walz has given us what may turn out to be the definitive treatment of inland Japanese Americans." —Oregon Historical Quarterly