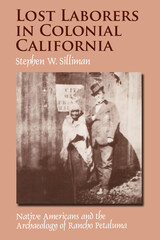 Native Americans who populated the various ranchos of Mexican California as laborers are people frequently lost to history. The “rancho period” was a critical time for California Indians, as many were drawn into labor pools for the flourishing ranchos following the 1834 dismantlement of the mission system, but they are practically absent from the documentary record and from popular histories.

This study focuses on Rancho Petaluma north of San Francisco Bay, a large livestock, agricultural, and manufacturing operation on which several hundred—perhaps as many as two thousand—Native Americans worked as field hands, cowboys, artisans, cooks, and servants. One of the largest ranchos in the region, it was owned from 1834 to 1857 by Mariano Guadalupe Vallejo, one of the most prominent political figures of Mexican California. While historians have studied Vallejo, few have considered the Native Americans he controlled, so we know little of what their lives were like or how they adjusted to the colonial labor regime.

Because Vallejo’s Petaluma Adobe is now a state historic park and one of the most well-protected rancho sites in California, this site offers unparalleled opportunities to investigate nineteenth-century rancho life via archaeology. Using the Vallejo rancho as a case study, Stephen W. Silliman examines this California rancho with a particular eye toward Native American participation. Through the archaeological record—tools and implements, containers, beads, bone and shell artifacts, food remains—he reconstructs the daily practices of Native peoples at Rancho Petaluma and the labor relations that structured indigenous participation in and experience of rancho life. This research enables him to expose the multi-ethnic nature of colonialism, counterbalancing popular misconceptions of Native Americans as either non-participants in the ranchos or passive workers with little to contribute to history.

Lost Laborers in Colonial California draws on archaeological data, material studies, and archival research, and meshes them with theoretical issues of labor, gender, and social practice to examine not only how colonial worlds controlled indigenous peoples and practices but also how Native Americans lived through and often resisted those impositions. The book fills a gap in the regional archaeological and historical literature as it makes a unique contribution to colonial and contact-period studies in the Spanish/Mexican borderlands and beyond.
AUTHOR BIOGRAPHY
Stephen W. Silliman is Associate Professor of Anthropology at the University of Massachusetts, Boston.
REVIEWS
“Silliman provides valuable insights into this neglected period.”—Journal of Anthropological Research

“Silliman shows us that, when one looks in the right places, the invisible native actors are actually not that difficult to see.”—Journal of Field Archaeology

“Silliman’s work will stand as an important example of study into the lives of forgotten people that is so important to the field of archaeology.”—Journal of the California Mission Studies

“The book does us all a service in reminding us to consider the life of Native Americans at the so-called ‘historical sites’ such as ranchos.”—Journal of California and Great Basin Anthropology

“What I particularly admire about this book is that it raises as many questions as it answers.”—California History Action