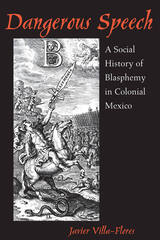 Dangerous Speech is the first systematic treatment of blasphemous speech in colonial Mexico. This engaging social history examines the representation of blasphemy as a sin and a crime, and its repression by the Spanish Inquisition. The Spanish colonists viewed blasphemy not only as an insult against God but also as a dangerous misrepresentation of the deity, which could call down his wrath in a ruinous assault on the imperial enterprise.

Why then, asks Villa-Flores, did Spaniards dare to blaspheme? Having mined the period’s moral literature—philosophical works as well as royal decrees and Inquisition treatises and trial records in Spanish, Mexican, and U.S. archives and research libraries—Villa-Flores deftly interweaves images of daily life in colonial Mexico with vivid descriptions of human interactions to illustrate the complexity of a culture profoundly influenced by the Catholic Church. In entertaining and sometimes horrifying vignettes, the reader comes face to face with individuals who used language to assert or manipulate their identities within that repressive society.

Villa-Flores offers an innovative interpretation of the social uses of blasphemous speech by focusing on specific groups—conquistadors, Spanish settlers, Spanish women, and slaves of both genders—as a lens to examine race, class, and gender relations in colonial Mexico. He finds that multiple motivations led people to resort to blasphemy through a gamut of practices ranging from catharsis and gender self-fashioning to religious rejection and active resistance.

Dangerous Speech is a valuable resource for students and scholars of colonialism, the social history of language, Mexican history, and the changing relations of gender, class, and ethnicity in colonial Latin America.
REVIEWS
"Because of the fascinating archival material that the author has gathered, Dangerous Speech has much to offer to those interested in the study of colonial social history."—Journal of Latin American Studies

“This study helps bring another degree of complexity and sophistication to our understanding of religiosity in New Spain.”—The Catholic Historical Review
— -

“Flores gives the reader a rare look at the social forces and consequences associated with blasphemous speech among different social groups in colonial Mexico between 1520 and 1700.”—SMRC Revista
— -